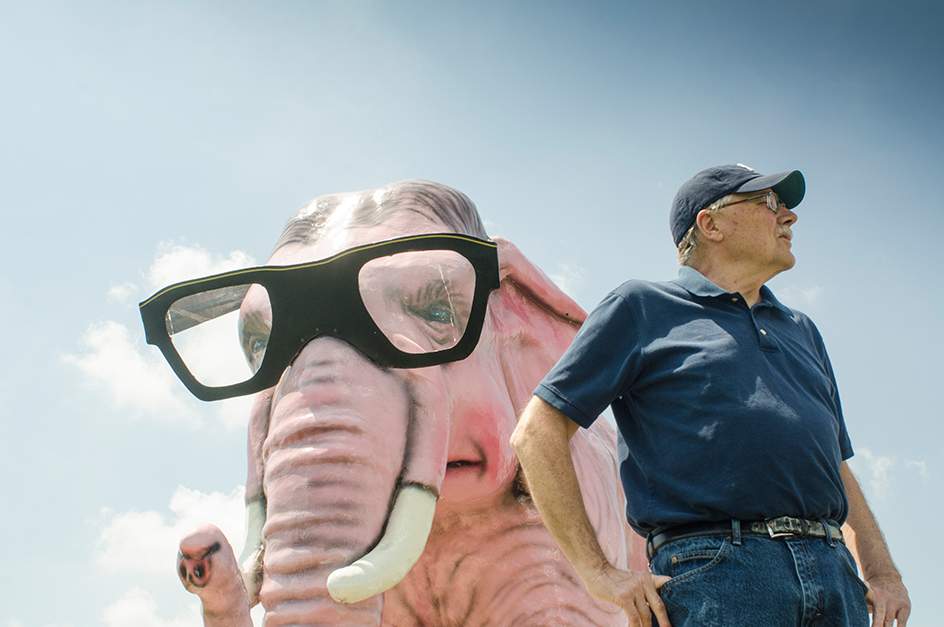 Let’s start with your connection to the area. We moved here in 1977. I was working at this gas station and also the one in Portage where Pinkie “lived” for a while before it was moved back here. My wife worked for the University of Wisconsin-Madison, so this was easy for both of us. There used to be four gas stations at this intersection and Pinkie helped give us a leg up as to which gas station travelers would choose when they took Exit 126.

Has Pinkie changed over the years? He’s had a few fresh coats of paint, and a cement slab was added so he wouldn’t get blown over from the wind like he was once. His glasses used to be sunglasses, but those were destroyed, although I think the reading glasses make him look like a smart elephant. One year Pinkie even rode in the July 4th parade.

How many photos would you estimate have been taken with him? Lots! Parents would ask us to take the photo for them because they wanted everyone in the family in the picture. People who had taken photos of their pre-school children next to Pinkie would make a point to return to years later with their grown children to get a new photo.

Any photos tips for visitors? Don’t climb on top of him!

What do you love best about the community? It’s the small town atmosphere that’s kept me here, the parks and trail system, and the proximity to Madison.

Favorite slice of Norske Nook pie? Was just there last week! Cherry pie is my favorite. For dessert, Culver’s is a custard stop for us.

Why is it worth it to visit Vienna? Everything a small town has to offer is here, including friendly people.

Back to the Group

President of Cornerstone Hotel Management and Chamber of Commerce member

Volunteer with the July 4th celebration